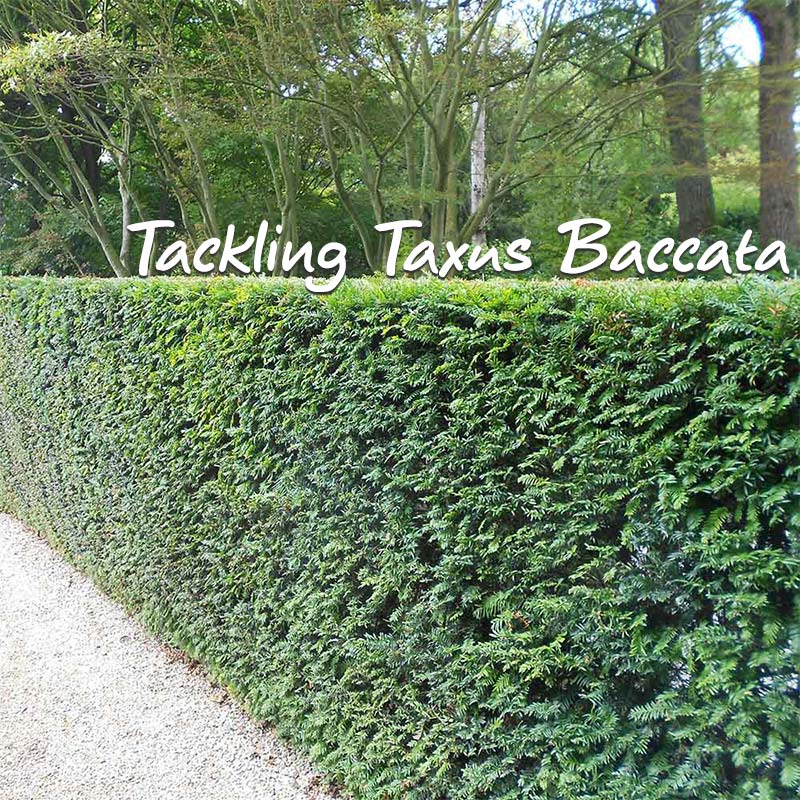 One of our best selling species is English Yew – or to use the latin name, Taxus Baccata. It makes a beautiful dark green hedge and it’s slow growing so it’s very easy to maintain, giving a sharp edge when just trimmed. It has another wonderful attribute in addition – which is the ability to re-generate from very hard pruning.

Yew is a dense, dark, evergreen species with bright green spring growth and autumnal red fruits which are much sought after by birds but harmful to humans, pets and livestock. It is often thought to be very slow growing but actually normally grows by 30/40cm pa so not as slow as many people think – but once it reaches its desired height, its easy to maintain.

Yew plants needs plenty of water in the first couple of seasons but should not sit in waterlogged soil. If you are concerned that you have clay, wet soil, please improve the drainage when planting Yew. Apart from its requirement for water, its very easy to grow, shade tolerant, very hardy, and likes all soils particularly alkaline. See also our range of hedging plants for shade. You can include Yew in a native garden feature to add interesting texture and winter cover. We have a huge range of native plants as fantastic additions to a multispecies hedge.

If the cost of Yew hedging is too much for your budget, you could also consider Lonicera nitida, which has a similar dark-green colour and dense habit (but requires more trimming), or Buxus sempervirens, the classic Box hedge, which will grow much taller than most people realise and has all the slow growing benefits of Yew. Or, for tall hedging, Western Red Cedar is a conifer hedging plant which is easy to maintain.

When to prune Yew hedging?

General hedge trimming should be done twice a year, once in early June and again in late September. It is important to prune at the right time, so as not to remove new growing shoots.

Often old hedges get a bit neglected and they can get too thick or full of weeds.  Not every species of hedging plant will recover from a very hard prune (by which I mean cutting back the width by up to 50%) but here are a couple of photos showing how this very old Yew hedge has recovered during the first and second year’s after a really severe prune (not that I’d really recommend that a hedge is treated this severely without being done by an expert!).   In the first year, the main stem of the plant – which is almost a tree trunk – is clearly visible and there’s a bit of nice new growth.

In the second year, the main stem is almost covered in lush new growth, and it’s back to being a hedge again.

So why choose Yew?

Although Yew is the most expensive species we sell (because it’s so slow growing it takes years longer in the nursery to reach a decent height than most other species of hedging plant) it’s an aspect that’s worth thinking about for those investing in an important hedge (prestige properties for example).