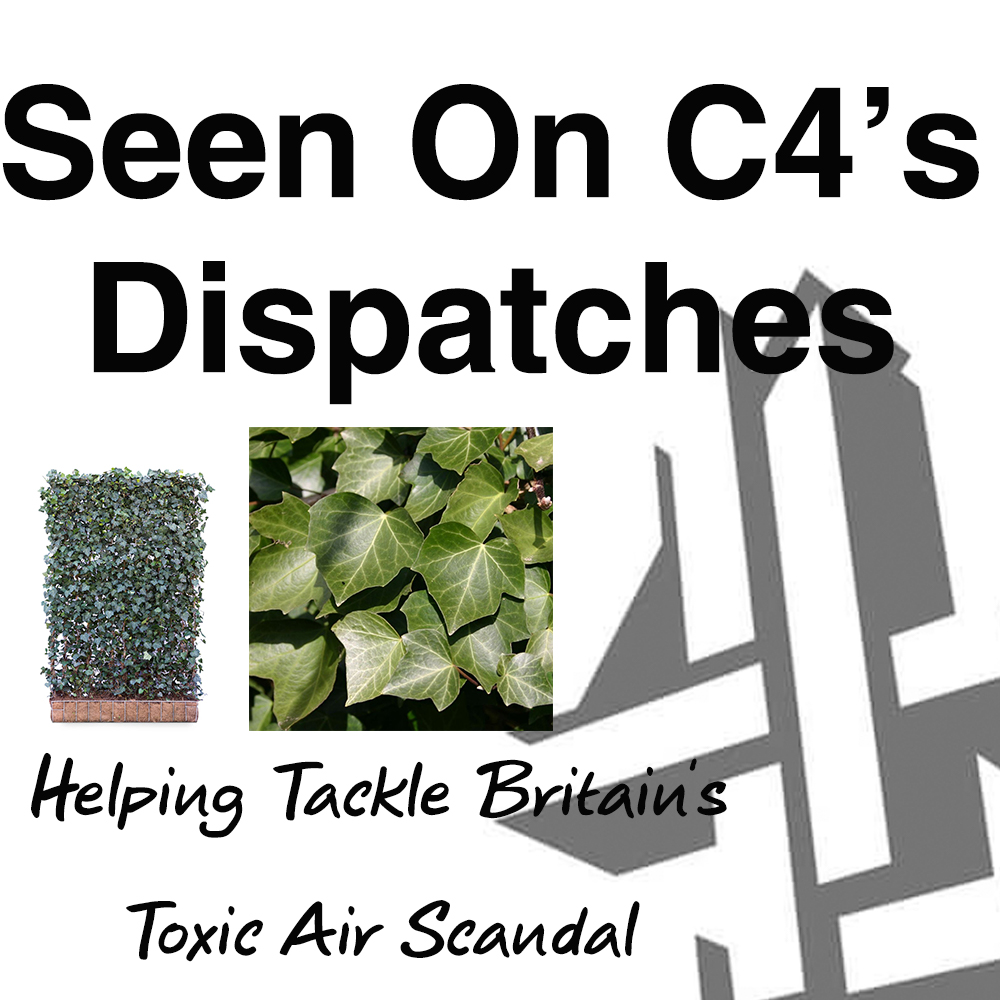 Pollution from traffic fumes and particulate matter is reaching high and illegal levels on a regular basis across the country with one in three children growing up exposed to unsafe levels of air pollution. The effects are highly detrimental leading to narrowing of airways, prevalence to lung diseases such as asthma and even affected brain development. But what is the solution?

Here at Hedges Direct we partnered with Green-Tech recently supplying Channel 4’s Dispatches programme with Ivy Screens and other garden plants in support of a ground-breaking experiment at Lordship Lane Primary School in London.

The C4 programme which aired on  Monday 10th June at 8pm, documented over a 2 week period, an experiment which saw the school undergo changes both externally and internally to attempt to combat the effects of pollution throughout. The levels of both Nitrogen Dioxide from exhaust fumes and other particulate matter from brakes and tyres produced by all vehicles (including electric), were measured before and after for comparison. Prior to the experiment, the Nitrogen Dioxide levels and other particulates around the school were found to be over 50% higher than ‘acceptable’ levels.

For the external anti-pollution measures, the Hedera Helix Ivy Screens, 1.8m high x 1.2m wide supplied by Hedges Direct, were installed as a perimeter solution around the school exterior to attempt to absorb sooty particles from traffic pollution and provide cleaner air for the children when spending time outside. A garden was also created in the playground area featuring various evergreen hedging plants to help supplement this.

At the end of the 2 week period, levels were measured again and the results were nothing short of staggering. In the playground and external areas of the school, the addition of the Ivy Screens and garden plants had reduced the pollution levels by as much as 53% – a siginificant reduction within a very short timeframe.

The question is, how much is our children’s health worth?  In the programme, Anna Kettley the Director of Programmes for UNICEF called for a national strategy with ring-fenced funding so that action can be taken on what she deemed a ‘major child health crisis’, with 86% of children now breathing toxic air as a result of ‘persistent and illegal breaches of the UK Air Pollution Limits’. It’s a frightening picture. However, whilst measures are being taken by the motor industry to reduce pollutants from vehicles, substabtial reductions and new government legislation to tackle the problem will all take time.

What the C4 Dispatches programme did highlight, was that these greener and simple anti-pollution measures, now have evidence to show significant contribution toward better air quality within the local environment, helping to reduce exposure to harmful pollutants and preserve the health and wellbeing of our children.

For schools and nurseries in heavily trafficked areas across the UK, of which there are over 2000 that fall into high / illegal levels of pollution areas, this information will no doubt be invaluable, and whilst funding is always an issue, ivy screens and other planting options can not only be cost-effective but more importantly can provide an immediate improvement in air quality, as evidenced in the programme.

To find out more about the Ivy Screens and plants supplied for the programme, visit here.