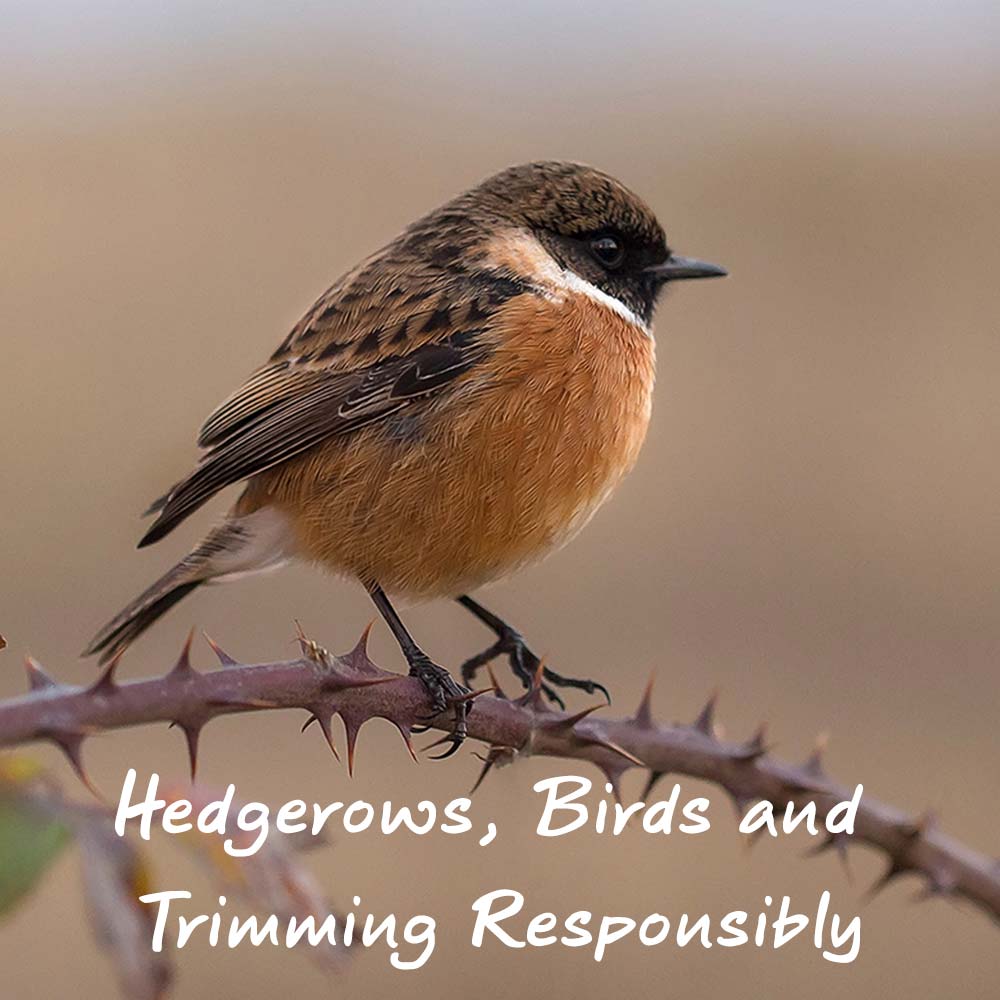 The Benefits Of Hedgerows

Hedgerows and hedges are an important feature in the British landscape and have been around for centuries, planted to divide the land into different fields and pens; marking the boundaries of farms and parishes and controlling livestock. Nowadays, hedges offer food and shelter for wildlife, provide historical and cultural links to the past and still act as boundaries and screens. However, recently they have become under threat from removal and poor management.

Hedging plants are important for both humans and wildlife. In terms of humans, hedgerows support the healthy functioning of the ecosystems around us by regulating things such as air quality, water purification and pollination. Hedgerows, like all plants and trees, help to manage air quality through the production of oxygen and removal of harmful gases. This is especially important in urban areas where more pollutant gases are released into the atmosphere. Hedges that act as a barrier between farms and fields, not only help to control livestock, but can reduce the amount of pesticides, fertilisers and eroded soils from the fields reaching water streams. When planted densely, hedgerows can also lessen the impacts of flooding by increasing infiltration rates and slowing water flows.

British wildlife benefits hugely from hedgerows, and with an estimated 73 million hedges and park trees across our landscape, it’s no surprise that they are the most widespread semi-natural habitat in the UK, providing food and shelter for a large variety of different invertebrates, birds and mammals. The loss of hedgerow trees, and lack of future management and replacement, may lead to a decline in certain wildlife if they cannot find flowers, berries and nuts to feed on or habitats to live in. As well as shelter and food, hedges also provide corridors for certain wildlife, such as hedgehogs and mice, to safely move through landscapes from one habitat to another.

The bird breeding season is usually between March – August, however birds can occasionally breed outside of this time-frame due to a number of environmental factors, including;

This has an impact on breeding, as birds with a breeding range far up north have a longer distance to travel, migrating to find their ideal breeding location.

Food is another key factor that affects breeding, as birds are more likely to breed when there is an abundance of food available to feed their young. When food is sparse, birds may migrate to an area where it is easier to find, which delays breeding.

Breeding times can also be impacted by the building of the nesting site. Species that re-use old nests can breed straight away, early in the season; whereas, birds that build a new nest every year can only mate later in the season when the nest is finished.

Nests are often found in hedges, as these diverse plants provide birds with shelter and warmth in the winter; an assortment of food and nutrients year round and a safe environment in which to breed and provide for their young.

Hedges consist of a simple lifecycle; insects feed on the flora and then birds feed on these insects. This creates a thriving biodiversity – one of the many reasons that British hedgerows are so important to our society; without them, British wildlife would struggle, particularly birds.

The most common hedgerow birds are:

Blackbird– these native birds are often found nesting within the hedge and adore the seasonal fruit produced by hedgerows. An omnivorous species, blackbirds also enjoy foraging for insects and worms in the growth surrounding the lower part of the hedge. It is the female blackbird that builds the nest, using grass, dry leaves and mud to create a domed, firm structure to protect the young.

Chaffinch– this is the most common hedgerow bird in Britain. Both male and female chaffinches are responsible for building the nest; working together to combine moss, feathers, wool and sometimes even spider webs to create a secure place for the eggs. Chaffinches eat from the hedgerow floor, feeding their young caterpillars, earwigs and spiders.

Greenfinch– this variety of bird is attracted to the quiet, bushy security of hedges, and feasts on any available hips and haws. In the past, greenfinches suffered a decline in numbers, as a destruction of hedgerows meant they had to adapt their diet and habitat to suit the garden environment.

Wren– known as Britain’s most common breeding bird, the male wren chooses a hedge and then builds several different nests, hidden in the low part of the hedge, before inviting a female to choose her favourite. When plenty of food is available, male wrens may have a few different families at the same time; however, if food is sparse, he focuses on one nest.

There are several other species of bird that choose to nest and feed in hedges, such as linnets, thrushes, and yellow hammer birds. On the other hand, nightingales and blue tits, although sometimes found nesting within hedges, prefer a woodland environment as this is where the majority of their diet comes from.

The form of a hedge influences the variety of birds found within it, with most birds preferring an overgrown and unkempt hedge; whereas, sparrows, robins and wrens favour hedges that are thicker at the bottom, as this protects the ground from frost, making it easier for them to forage in winter.

The best shape to encourage birds to nest in your hedge is a trapezium shape; this is keeping the base wider than the peak, providing cover for safe foraging. To encourage sparrows in particular, the best hedging variety to plant is honeysuckle or hawthorn.

We recommend that any heavy clipping of hedges and trees is avoided between March and August as this is the main breeding season for nesting birds.

Therefore, it is an offence to cut a hedge, knowing there is a nest present. Always check your hedges thoroughly before trimming!