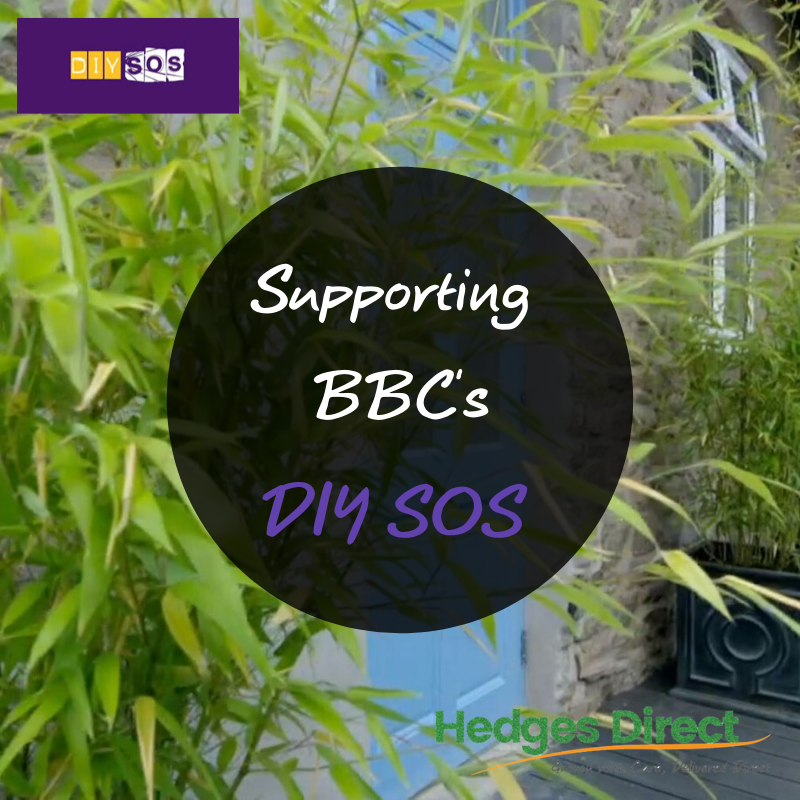 Hedges Direct are proud to have supported this week’s Children in Need special of BBC’S DIY SOS.

DIY SOS and BBC Children in Need embark on a truly challenging build for the young homeless people who are being supported by local Blackburn charity Nightsafe.

Young homeless people are often overlooked, vulnerable and very much in need of help. The borough of Blackburn with Darwen is one of the poorest in the country, and there maybe dozens of young homeless on the streets nightly. Across the UK tens of thousands of young people are sleeping rough or in temporary accommodation each year. It’s a growing problem that needs addressing. Luckily, the people who run local charity Nightsafe want to make a difference, but their current accommodation facility is full to capacity, so they were desperately in need of a new centre.

As ever, it was an immense challenge, relying on generous volunteers and kind donations.

Hedges Direct donated various plants to fill the garden space in the new centre with life:

“It’s good for the mind to have greenery around us”

Watch the Children in Need episode of DIY SOS here.

Other products featured in the show:

We recently supported DIY SOS in 2018

Aired on BBC1 3rd October at 8pm, Nick Knowles’s DIY SOS team, the flamboyant designer Laurence Llewelyn Bowen and volunteers pitch up in Avening, in the idyllic Cotswolds, to help project manager Ben whose life was changed in a split second by a freak accident on holiday.

In April 2016, whilst holidaying in Cyprus, with his partner Ella and daughters Iris (3) & Olivia (8), Ben slipped and fell head first into the shallow end of a pool, tragically breaking his neck in three places.

After months of treatment in both Cyprus and Germany (Ben was resuscitated for hours on an airport runway) he was finally flown back to the UK, where the Salisbury Spinal Unit made amazing progress with him over the next 12 months.

Despite his life-changing injuries there is hope: If Ben could return home he would be reunited with his family and could even work from home again as a project manager.

But for this dream to become a reality, his home needs to be adapted with a front access and a two-story extension with through-floor lift, along with all the bespoke care provision that Ben will need, including a home-office space.

Avening is a special place. The local community here donated their time and money as well as carving out the steep stone hillside for one of the two extensions and laying a concrete ramp from the road to the front door, before funds ran out.

Now the DIY SOS team are joining forces with this generous community to get the build finished, to include an impressive 3 metre bespoke bridge linking the new house to the earth shattering landscaping, so that Ben may be re-united with his family.

Hedges Direct supplied the show with Ivy screens to be used in the garden. Hedera helix Ivy screens (a non-invasive variety) are an innovative screening solution that mean you can enjoy the security of a long lasting fence with the aesthetic and environmental benefits of a hedge. They are a greta feature for a family garden and provide instant security. Wall screens keep children and pets in and intruders out. They also provide instant privacy and create a secluded area within your garden.