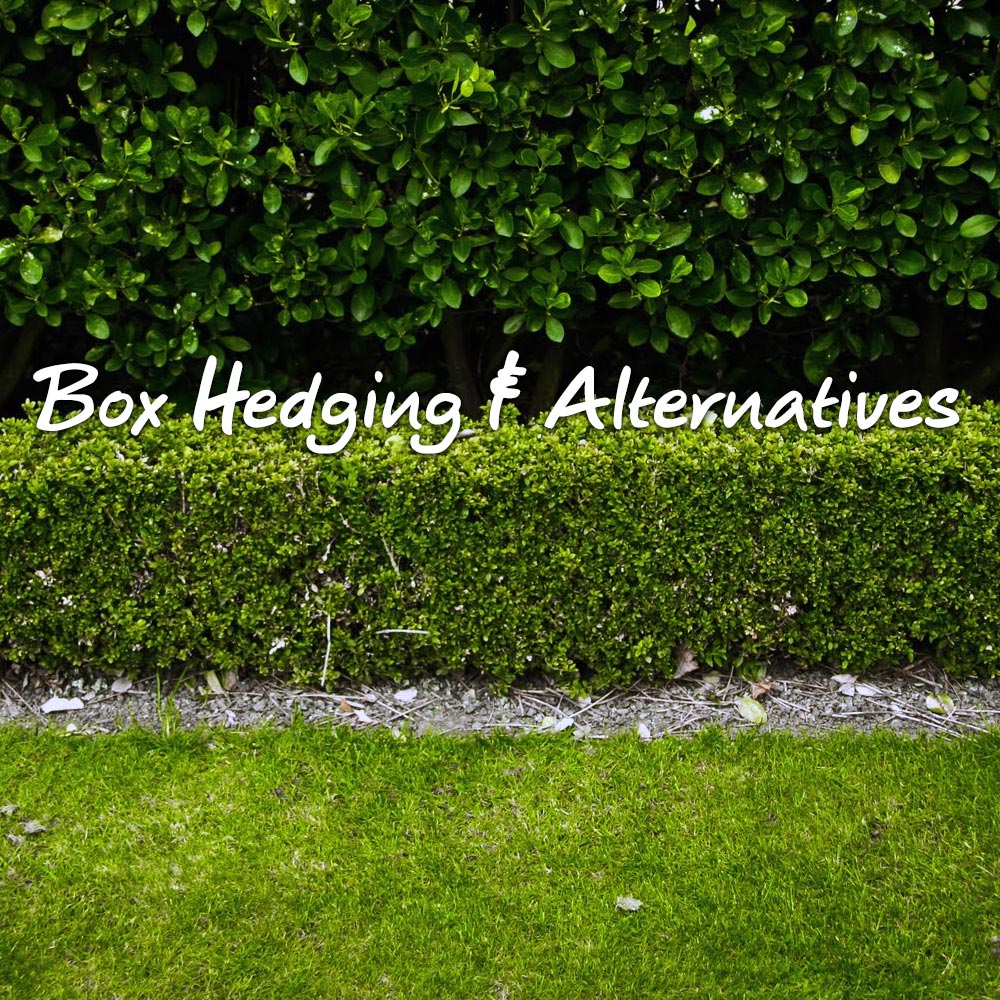 Buxus sempervirens (Box hedging, also known as ‘Boxwood’) is a native, shade tolerant plant that is suitable for most soil types and sites other than wet or windy sites. It is a versatile, classic hedge favoured by many people for its dense and verdant appearance. Due to its slow growth it is also very manageable in terms of upkeep and is easily trimmed and kept to a desired shape, often providing a lovely, green privacy screen if grown to height. Because of its versatility and appearance, Box hedging has a universal appeal in both urban and large formal garden situations and can be used to great effect for borders, partitions, green walling (think mazes and pathways) and even beautiful and intricate parterre knotwork gardens. It truly is the most lovely of hedges with a multitude of possible combinations for shape, height and use which is why it is consistently one of our top ten selling species of hedge plant. Buxus Sempervirens comes in bare root, root ball, pot grown and instant box hedging.

When is the best time to trim?

It should be trimmed in late spring with hand shears if possible, keeping the blade of the shears parallel to the hedge surface.  Hose the hedge with plenty of water before you start and keep dipping the shears in a bucket of water every few clips – or do it in the rain!   Apparently, the wet edges heal much quicker, reducing the amount of brown edges that are so common when Box is clipped.

Box hedging is also the main form of hedge plant used for Topiary due to its specific characteristics and the shapes which can be created are only limited by the imagination. However there are timeless classics, always popular, such as Topiary Balls, Topiary Cubes and Topiary Spirals. These are just some of the Topiary shapes available from Hedges Direct – for the full range click here.

With various sizes of box hedging plants for sale we’re certain you’ll find exactly what you’re looking for in the root type, sizes and prices adjacent or alternatively view our huge range of evergreen hedge plants for year round interest.

On the latest episode of BBC’S Gardeners World, Adam Frost hosts the show in his garden in Cambridgeshire where he shows off his new water features that need some hedging around to create a border. Adam chooses the popular Box (Buxus sempervirens) in small pots to create a formal low border. Using smaller pots keeps the price down and although it doesn’t give an instant effect, after a couple of years growth the roots will be more established. View the episode here

You may be familiar with this term and it may be something that is currently invading your gardens. Monty Don took out all his box hedging on Gardeners’ World because of box blight. So what is it? Box blight is a disease found on box (buxus semperviren) leaves from the fungus
Cylindrocladium buxicola (syn. Calonectria pseudonaviculata). The disease can be spread by wind driven rain, overhead irrigation, animals (pets catching the disease on their fur and transferring it onto your box). We hate mentioning Box blight in a blog because we wouldn’t want people to be put off the classic Buxus sempervirens – it’s one of our top 10 sellers (literally tens of thousands of plants per annum) and we have not once ever in over 8 years had a customer report blight following supply of our plants. The symptons of box blight are:

Make sure to regularly check your box for any sign of infection.
Inspect plants for early symptoms as box blight spreads very rapidly in warm and humid conditions and is difficult to manage. Taking cuttings from healthy box in your garden will reduce the risk of introducing the disease.

Reduce the frequency of clipping to create more ventilation throughout the plants (regular pruning creates dense foliage and less air movement). Prune a hedge with a convex top rather than flat and prune only in dry conditions. Clean pruning tools with a garden disinfectant or mild bleach solution between different areas of the garden and between gardens to minimise unwitting spread of the disease. Plant box hedging close to a surface that won’t splash back. taken from RHS

Box caterpillar was first found in 2007 and first sighted in the UK in 2008. It is in season from mid-March to October. Box tree caterpillars feed within webbing and can completely defoliate box plants. The caterpillars are a lot more prominent in the south of the UK. See EBTS (European Boxwood and Topiary Society) for their map of caterpillar recordings.

What to do and how to remove box tree caterpillars?

We do not recommend using a jet wash to remove the caterpillars, this is likely to cause damage to the plants and promote blight.

Is There An Alternative To Box?

The obvious alternative to Box hedging is Ilex crenata or Japanese Holly – not a typical Ilex (Holly) at all but a lookalike for Buxus with small dark green leaves, an upright habit and slow growth which keeps it neat and tidy. But there’s also another alternative to Buxus –  Euonymus Japonicus Jean Hugues which is a bit of a tongue twister. It’s almost indistinguishable from Buxus to all but an expert and it has become immensely popular in recent years.

Ilex crenata or Japanese Holly is practically identical to Box, with small, rounded, glossy dark green leaves. Although it is part of the Holly family, the leaves are not prickly so it’s safe to use in all areas of the garden. The main benefit of planting Japanese Holly instead of Box is that it is not susceptible to box blight. Ilex Crenata is also a great alternative because it’s not prone to leaf scorch and you can also prune into brown wood if it has been neglected.

Japanese Holly creates a compact, evergreen hedge and can be easily maintained between 20cm – 3.6m in height. It has an annual growth rate of approximately 20-30cm and has an ultimate width of 1.8m. Ilex crenata is suited to most soil types, including chalky or clay and prefers a well drained site. It can be planted year round in full sun to partial shade.

Box or Japanese Holly can be used to create gorgeous Parterre style gardens. Parterres are formal gardens consisting of planting beds designed into symmetrical patterns and are usually separated by gravel pathways. Traditionally, Box hedging was used to add structure and form to the gardens but Japanese Holly is now fast becoming the new favourite due to its similar aesthetic but added benefits.

Another hedging alternative to Box is Euonymus Jean Hugues. Again, this is almost indistinguishable from Box, only our horticultural experts can truly tell the difference!